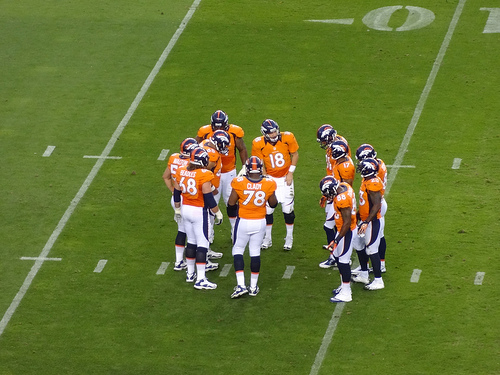 The 2013 NFL Preseason has officially started. Although a lot can change during the course of a s season due to injuries, breakout performances, game dynamics, a preliminary power ranking of the NFL’s teams have been published. To form the power ranking data, advanced computer simulation is performed, inputting thousands of statistics, and running through more than 10,000 simulated games to see who comes out on top. The simulation even takes into account hard to measure variables such as crowd noise levels at various stadiums, proneness to injury, and historical performance. Going into the start of the 2013 NFL season, the top ten teams in the NFL are:

Last year the Houston Texans won the AFC South and had the second-best record in the AFC last year. Despite having a great season, the team fell short, once again, in the postseason. During the offseason Rick Smith managed to address some of the team’s weaknesses. He drafted DeAndre Hopkins to add to the receiver core and drafted D.J. Swearinger to address a roster gap on defense. In terms of raw athletic talent, the Houston Texans have some of the best players in the league including Adrian Foster, Andre Johnson, and J.J. Watt. The success of the Houston Texans this year depends on Matt Schaub’s ability to make plays and the play-calling of Gary Kubiak.

After having a rough season last year, there is a lot of good news and things happening for the New Orleans Saints. With the return of head coach Sean Payton from a season-long suspension last year, the Saints are well-positioned for playoff contention. With the guidance and play calling of Payton, it is likely that all-star Drew Brees should return to his efficient self we have all come to love. With Marques Colston and Jimmy Graham, Brees should have plenty to work with on offense. On defense, Rob Ryan’s new 3-4 defense should add some energy to the team.

The Super Bowl champions will return with an impressive team this year, but they did lose a number of key players during the off-season. Joe Flacco succeeded at making a name for himself during the postseason last year and earned every dime of his record-setting NFL contract he received this off-season. As a result of his personal growth, he has shown he is dynamic and as a result has enabled the rushing lanes for Ray Rice and Bernard Pierce, which in turn opens up play action for Jacoby Jones and Torrey Smith down the field. The loss of Anquan Boldin and Dennis Pitta, however, will be felt on offense. On defense, espite the lose of Ray Lewis and Ed Reed, the Raven’s defense is predicted to be just as good as last year, if not better, with the additions of Matt Elam, Michael Huff, Chris Canty, Brandon Williams, Arthur Brown, Daryl Smith, Elvis Dumervil, and getting back Lardarius Webb from his season-ending injury last year.

Much of the team which won the number one seed last year in the NFL will be returning. The offense features Matt Ryan, Tony Gonzalez, Roddy White, Julio Jones, and newcomer Steven Jackson. This combination of personnel is expected to be as explosive and competitive as ever. The addition of Jackson will provide more balance to the offense and can potentially open up the pass game even more this year. Despite losing several players on defense, the Falcons should be fine with their additions from the draft and free agency. Gone are John Abraham, Dunta Robinson, and Brent Grimes, but joining the unit are Osi Umenyiora, Desmond Trufant, and Robert Alford.

Last year the Pittsburgh Steelers had one of the worst seasons they have had in a long time, finishing 8-8 and missing the playoffs. As a result the team is bigger, faster, hungrier, and healthier. This year, Big Ben will be much more protected than he was last year. Addtionally, Mike Adams and David DeCastro are both healthy and are more experienced now. The defensive unit is predicted to be one of the toughest is the league. With Lamarr Woodley, Lawrence Timmons, and Troy Polamalu, the unit should be able to contain almost any offense in the league. So long as the young players on the roster can perform, the Pittsburgh Steelers have a legitimate chance of going far this year.

Aaron Rodgers is arguably the best active quarterback in the league today. With wide receivers Jordy Nelson and Randall Cobb, Rodgers will have plenty of offensive weapons. Even if the pass game gets shut down, the combination of Jonathan Franklin and Eddie Lacy will provide a balanced attack against any defense. On defense, the duo of Nick Perry and Clay Matthews is one of the best outside pass-rushing pairs in the league. The bottom line is, as long as Rodgers is under center, the Green Bay Packers will always be a contender.

It should be an interesting year for the New England Patriots. Protected by arguably the AFC’s best offensive line and with the help of the 1,200 year rusher Stevan Ridley and legendary quarterback Tom Brady, the New England Patriots will be a serious contender. With the losses of Wes Welker and Aaron Hernandez during the off-season, it is easy to be pessimistic about the Patriots this year, but combined with an improving defense, and other offensive weapons, they will show the league what they can do. It is never a good idea to bet against Belichick and his crew. For this reason, the New England Patriots come in at number 4 in the overall preseason power rankings.

Now in his second year, the sensational Russell Wilson is expected to hit the ground running. Wilson is now the established captain of one of the most balanced offenses in the league. Marshawn Lynch proved to be one of the most intimidating rushers in the league last year and is expected to do more this year. Combined with Wilson’s calculated and efficient passing, the Seattle Seahawks will have a true dual-threat offense. It is predicted the Seahawk’s defense will be in the top 5 of league this year. The one issue which plagues the Seahawks is suspensions and injuries. Injuries to Percy Harvin, Chris Clemons, and Michael Bennett make the first part of the season very concerning.

After a devastating loss to the would-be Super Bowl champions, Baltimore Ravens, during the first round of the playoffs last year, the Broncos will be seeking redemption. With Peyton Manning returning as quarterback and an all-star receiving line-up, the Denver Broncos will likely lead the league in passing. During the off-season the Broncos acquired Wes Welker from the free agency to add to the lineup of wide receivers which includes Demaryius Thomas and Eric Decker. As long as Manning manages to stay healthy, the offense will be good enough to beat any defense in league. The defense isn’t so bad either. Featuring a dynamic pass rush, the defense should be able to hold teams down enough while Manning racks up points on the scoreboard.

Although, the San Francisco 49ers didn’t win the Super Bowl last year, they will me a force to be reckoned with. The second-year quarterback Colin Kaepernick will resume the mantle of the team and is expected to player better than ever as he becomes more comfortable. In terms of raw talent, the 49ers have some of the best in the league. The off-season additions of Anquan Boldin, Vance McDonald, Glenn Dorsey, Eric Reid, and Nnamdi Asomugha will certainly make the team even that much better. The 49ers’ run game will be one of the best in the league with four great backs including Frank Gore, Kendall Hunter, and LaMichael Davis. 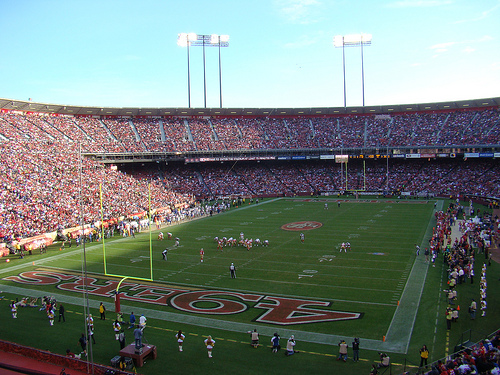